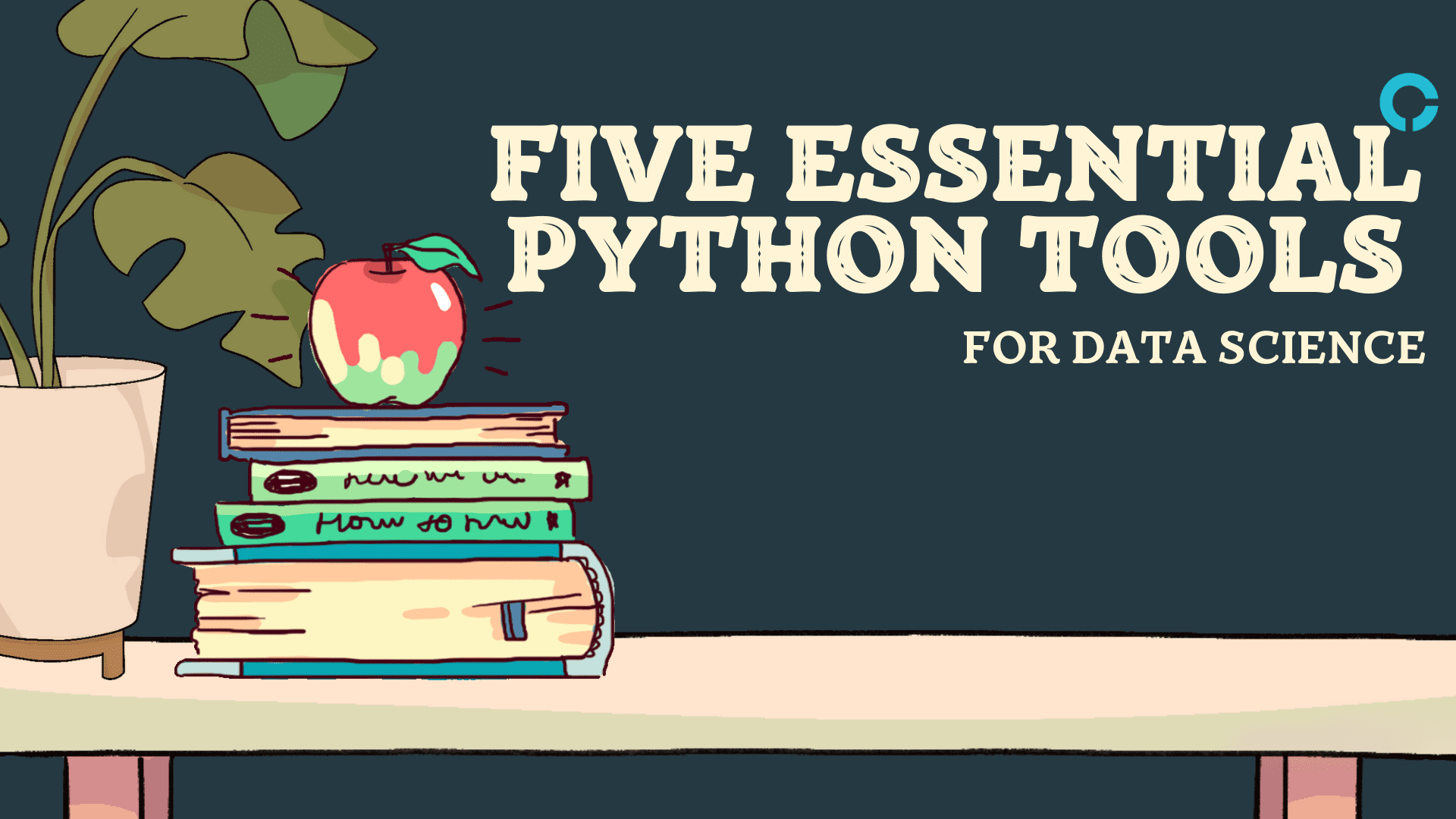 Python is one of the most popular programming languages globally and is the basis in everything, from Netflix’s recommendation algorithm to the program that controls autonomous vehicles. Python is a general-purpose language, which means it’s designed to be used in a broad array of applications, including data science software and web development automation and general-purpose tasks.

Python can be the best place to start if you’re looking to master or use information analysis. Python is a breeze to master as it comes with broad and comprehensive support, and nearly all data science libraries or machine learning software exists including a Python interface.

In This Article You Will Know About Five Python Tools For Data Science.

Five Python Tools For Data Science – Before moving ahead, let’s know a bit about Python Introduction.

Python users looking for an efficient and fast math library can utilize NumPy. However, NumPy in itself isn’t task-oriented. SciPy uses NumPy to provide libraries to support the most common science and math-related programming tasks, ranging from linear algebra to statistical studies and signal processing.

How SciPy helps with data science

SciPy has been around for a long time and is renowned for providing accessible and widely-used tools to work in math and statistics. However, it was not available with an official 1.0 release for a long time, though it was able to backward compatibility across versions.

The motivation behind moving this SciPy development to Version 1.0, According to the project’s core developer Ralf Gommers mainly there was an improvement in the way the project was run and operated. It also provided an option for continuous integration of the macOS and Windows builds, as well as being able to support already-built Windows binaries. This means Windows users can now use SciPy without having to go through any additional hurdles.

In the time since 2017’s SciPy 1.0 release in 2017, The project has produced seven major point releases with numerous improvements throughout development:

SciPy binaries can be downloaded from the Python Package Index or by typing pip install scipy. Source code is available on GitHub.

Numba allows Python modules or functions to be converted into assembly language through the LLVM compiler framework. It can be done anytime you need to speed up the way a Python program is running or is running ahead of schedule. In that way, Numba is like Cython; however, Numba is generally easier to use, even though programs that Cython accelerates are simpler to distribute to third-party.

How Numba can help by utilizing data science

The most evident method Numba aids data scientists is through speeding the processing of operations created in Python. It is possible to prototype your projects using pure Python and then add annotations using Numba to make them fast enough to be suitable for use in production.

Numba can also provide speeds that run faster on machines designed for data science and machine learning applications. The earlier versions of Numba enabled compiling to CUDA-accelerated codes; however, the latest versions include the improved, more efficient GPU software to accelerate compilation and the ability to support each of the Nvidia CUDA as well as AMD the ROCm APIs.

Numba is accessible via the Python Package Index. It is possible to install it using the command pip install numba on your command prompt. It’s also an element of Anaconda Python distribution, where it is installed using “conda” install Numba. The source code is available at GitHub.

Cython changes Python programming in C code that runs several orders of magnitude faster. This conversion is most beneficial for heavily math-based programs or that are run in tight loops. These are typical in Python programming designed for science, engineering, and machine learning.

How Cython helps in data science

Cython code is Python code, but with some additional syntax. Python code is compiled into C using Cython; however, the most significant performance gains ranging from hundreds of times faster–are due to Cython’s annotations for type.

Before Cython 3 arrived, Cython sported a 0. xx numbering scheme for versions. In Cython 3, the language removed its support for Python 2 syntax. Despite Cython 3 remaining in the beta stage, the maintainers of Cython urge users to make use of it instead of previous versions. Cython 3 also emphasizes more significant usage in “pure Python” mode, where a lot (although it’s not the only one) of Cython’s features can be made available via language that’s 100 100% Python-compatible.

Cython is also compatible with Notebooks for IPython and Jupyter. Cython-compiled code can be used in Jupyter notebooks by using inline annotations just as it were Cython code was a standard Python code.

Cython is accessible through the Python Package Index and is installed using pip install Cython on the command line. Versions of Cython that are binary for 32-bit and 64-bit Windows and general Linux and macOS are available. Source code is available on GitHub.

Processing power is more affordable than ever before; however, it isn’t always easy to utilize the maximum effective method by breaking tasks across multiple processing cores of a CPU, physical processors, and compute nodes.

Dask is a program that takes the Python job and manages it effectively across several systems. The syntax used to initiate Dask jobs is identical to that used to perform other Python functions. Thus, using Dask does not require any rewriting of code already in use.

How Dask can help with data science

Dask offers its version of interfaces used by many well-known scientific computing and machine learning libraries written in Python. Dask’s DataFrame object is identified as the one used in the Pandas library; similarly, its Array object is just as NumPy’s. This means that Dask lets you swiftly make your existing code parallel by changing only a few lines of code.

Dask could also accelerate tasks created in pure Python. It also has objects suited for optimizing mapping, filtering, or group by on general Python objects.

Dask is accessible via the Python Package Index, and it can be installed using the pip installation disk. It is also available through an Anaconda version of Python and can be installed by typing “conda install.” The source code is available at GitHub.

Vaux allows users to perform lazy operations on big tabular datasets, essentially data frames per NumPy or Pandas. “Big” is in this context is a reference to billions of rows, and all operations are performed in the most efficient way possible with no copying of data, minimal memory consumption, and built-in visualization tools.

How Vaex can help with data science

Large datasets processed in Python typically require a quantity of wasted processor or memory, particularly in cases where the work is limited to an element of data–e.g., one column in the table. Vaux runs computations when required and makes the most efficient use of computing resources available.

Vaux is accessible via the Python Package Index and is installed using the pip install of Vaex on the command line. Be aware that it is recommended to install Vaex in a virtualized environment or utilize Vaex with the Anaconda Distribution of Python for optimal results.