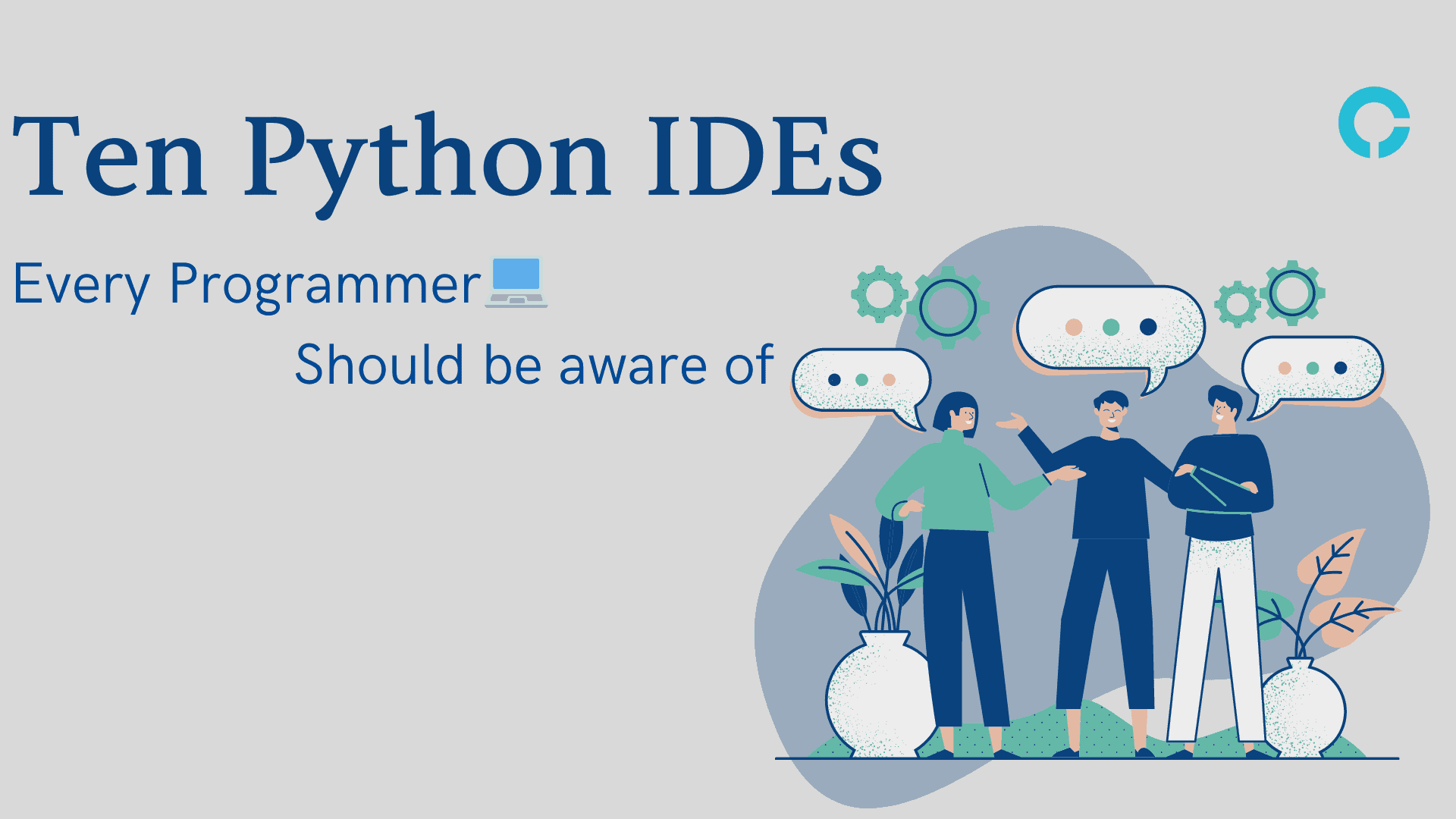 Python is the basis for many of the most advanced server-side applications and everyday web applications available today. Python is a programming language that its many libraries extensively use. These libraries assist in developing mathematical and scientific research AI/ML (Artificial Intelligence and Machine Learning in the respective senses), programming, robotics, and much more.

If you’re an avid Python user, then you may have noticed the significance of IDEs and their use when programming. IDEs can be described as code editors that come with additional tools built-in that open the way to efficient and efficient development.

If you’re fed up with your default Python Text Editor, look into these Python editors that every developer must be aware of.

In This Article You Will Know About ten IDEs of 2022.

Ten IDEs Of 2022 – Before moving ahead, let’s know a bit about Ten Back-end Programming Languages In 2022.

PyDev is an IDE for programming. PyDev IDE is accessible to programmers via a plugin extension of the Eclipse IDE suite. Apart from the regular basic Python programs, you can also work with CPython, IronPython, and Jython.

PyDev has comprehensive instructions to help you bootstrap Python programming for novices. The graphical debugging capabilities and the PyLint-integrated features for code analysis provide a significant advantage when checking code blocks that are long and rambling for mistakes.

The clever typing hinting and code completion features speed up Python programming and aid beginners in remembering syntax at the moment. In terms of an integrated IDE, PyDev offers a remote debugging capability that lets you work beyond the Eclipse IDE.

PyCharm is the idea of the software giant JetBrains, the renowned IntelliJ IDE creator. The IDE offers a stylish and color-coded environment that swiftly discovers mistakes and identifies programming entities.

The code editor ensures that your projects are running in the correct environment setup and comes loaded with tools to aid in debugging code analysis and testing.

PyCharm contains a range of highly integrated tools, including Anaconda, PyLint, WakaTime, and Kite, to make the most of the power of Python’s data science capabilities.

The cross-platform IDE is compatible with Python 2. x and 3. x syntax and offers clever suggestions to speed up your programming sessions while reducing errors.

Sublime Text is an incredibly feature-rich IDE with a highly intuitive contextual-aware auto-completion and error-finding and syntax definition capabilities.

Sublime is well-known for its low use of memory. Its recently updated Python API allows backward compatibility with older Python programs. It provides large-sized project management with sidebars, split windows, and multi-tab options.

Sublime Text has consistently delivered an extremely light but packed with features IDE solution for developers. It has various exciting features that will cause you to change to Sublime Text from other options available.

Visual Studio Code is an actual Python coder designed for Windows-only development. Integration with Django and Flask frameworks has increased its appeal with programmers in recent years.

Visual Studio offers users access to a wide range of Python-related libraries and integrates additional external libraries. It is possible to manage dependencies for projects effortlessly using pip and PyPI.

VS Code has multiple Python interpreters to meet your project’s specific requirements. Programmers can utilize this feature to emulate the Windows Subsystem for Linux environment emulator with Python. Python extension.

Vim began as an open-source editor that was developed for Unix. But it has evolved into an IDE is now gaining recognition as a reliable Python editor. The code editor also supports CUI in addition to GUI-based programming.

It is possible to manage and organize Vim’s extensibility and adapt it to different Python projects.

Emacs is an IDE licensed under GNU with a specific Python mode that provides Python programming. Emacs highlights constants, variables, and syntax in different shades, allowing users to differentiate them from crowded code blocks. The auto-indentation feature neatly organizes your statements, making your code well-organized and clear.

The IDE includes comprehensive support for shells to allow interaction and completion, virtualenv, and packages. Additionally, it has specific Python packages like Spacemacs, Doom, and Elpy.

Atom is an editor for Text that’s open-source and an integrated Python compiler. It provides the Python language support extension that integrates with its language server. Atom is community maintained; its packages extend Python’s capabilities, and they’re created and maintained by the dev community.

Atom IDE includes packages like Jedi and Rope to aid in definitions, completions and references, symbols, and changing names. It also comes with YAPF code formatting, McCabe Linter for complexity tests, Pyflakes and PyLint for errors detection, and Pydocstyle to check docstring styles.

IDLE offers a highly effective shell or interactive interpreter, as well as highlights for code, auto-indentation, and code completion, as well as many more.

IDLE was created by using IDLE was developed using the Python Tkinter GUI toolkit. The debugger is worthy of an extra mention because of its persistent breakpoints, local and global namespace viewing, and the ability to step.

The debugger permits you to line-jump to issues for rapid debugging. Utilizing its built-in stack reader, it is possible to trace the error back to the stack used to make the.

If you’re looking for an IDE to support scientific Python programming, Spyder is the best option available. It’s an open-source and cross-platform IDE specifically designed to aid data engineers, scientists and analysts.

It comes with a powerful editor that allows for interoperability with other languages. It also has an IPython console to perform GUI programming and an advanced variable Explorer.

Users can expect a myriad of plugins to enhance their capabilities, such as Notebook, Terminal, and Unittest. It helps in debugging complex Python block code for novices.

Thonny is a well-written Python IDE tailor-made for beginners. It is highly customizable. IDE works well with a variety of Python versions.

The GUI-based IDE includes a selection of standard packages and the possibility of adding additional packages according to the need. It provides useful shell commands to facilitate easy variable insert. It comes with an intuitive debugger that allows novices to test their skills by shortcuts.

Thonny enhances your Python learning by allowing expression evaluation. You will grasp fundamental concepts such as APIs and function calls when working with the Thonny interface.

Code editors are an integral component of Python programming, and programmers are constantly looking for solid IDE interfaces to develop their code.

But, in most cases, when you don’t want to devote the time configuring and downloading IDE software on your system, then explore internet browser IDE versions. They provide their unique capabilities, similar to those on desktops.