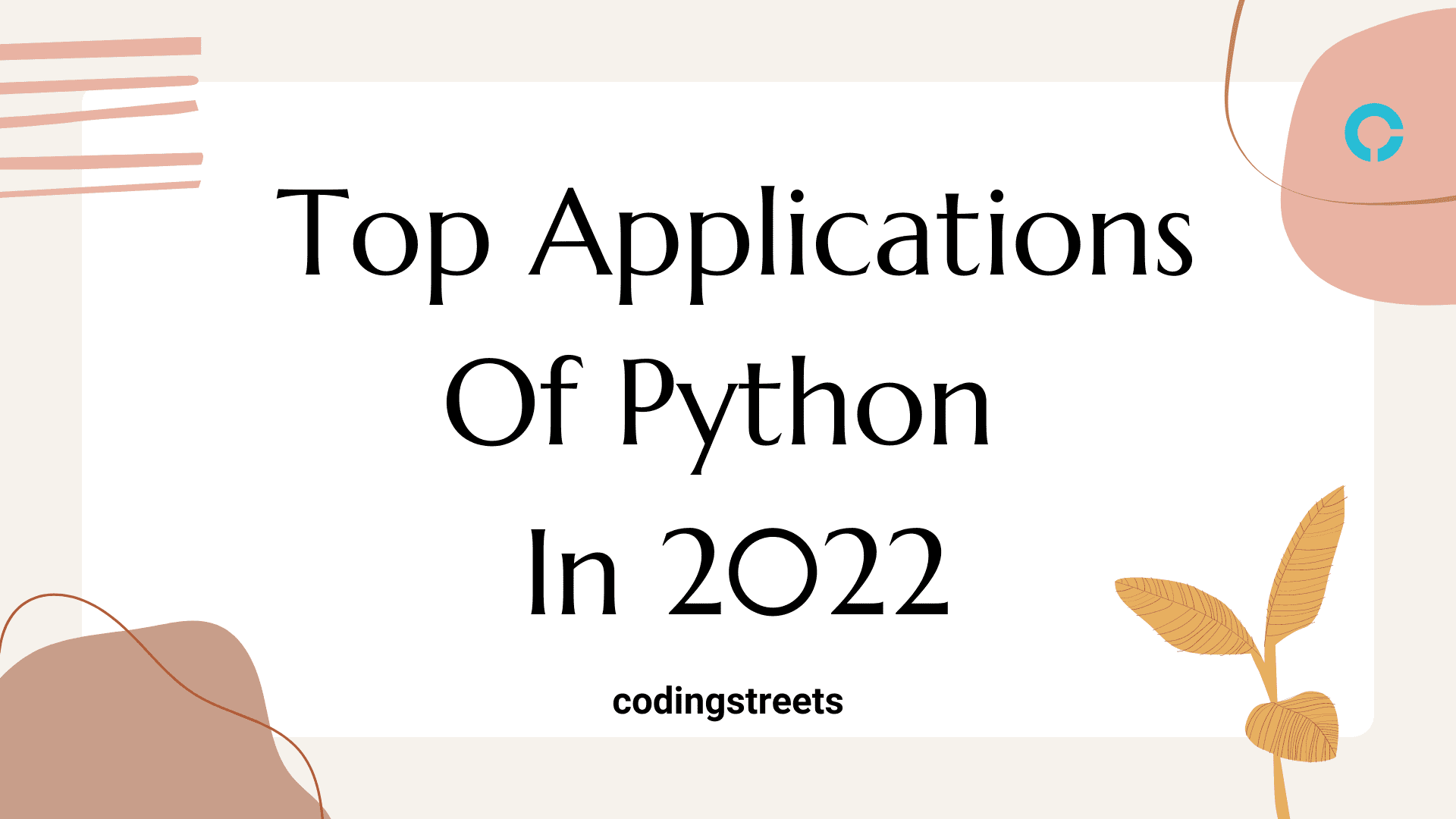 An Object-Oriented programming language can represent real-world data, while a functional programming language is focused on functions (code that can be reused). Python supports both functional and object-oriented programming. Python is user-friendly and adaptable, which means that a Python program written for the Windows machine or Linux machine will also work on iOS and vice versa. There is no need to modify the code. This article highlights Python’s top 10 most popular practical applications in 2022.

In This Article, You Will Know Top Applications Of Python

Top Applications Of Python – Before moving ahead, let’s know a bit about Programming Languages in 2022.

Python can also be an excellent instrument for shaping solutions based on data like Spotify. It provides an incredible music streaming experience, aided by features such as Discover playlists and innovative Radio channels that use Python-driven information insight.

A python is now a vital tool in both scientific and numeric computing. It serves as the skeleton for applications that handle computational computation and scientific data processing. Software applications such as FreeCAD (3D modeling application) and Abaqus (finite element method software) are written in Python.

In every company, web development is crucial. Python has a wide range of options available to develop web applications. You can use Django, Pyramid, Flask, and Bottle to develop web frameworks and advanced CMS systems for content management such as Plone or Django CMS. These frameworks for the web are loaded with standard libraries and modules that simplify tasks like the management of content and database interaction and interaction with internet protocols such as HTTP, SMTP, XML, JSON, FTP, IMAP, and POP.

Python is loaded with various helpful extensions (libraries) that come in helpful in creating interactive games. For example, there are libraries such as PySoy (a 3D game engine that supports Python 3) and PyGame, two Python-based software libraries widely used to develop games. It’s the basis for popular games, such as Battlefield 2, Frets on Fire, World of Tanks, Disney’s Toontown Online, Vega Strike, and Civilization-IV.

In addition to the game design, game designers can also use it to create tools to simplify specific tasks, such as designing levels or creating dialog trees, or even using those tools to export these tasks into formats that the main game engine can utilize. Additionally, Python is used as a scripting language in many game engines.

Through the years, the Python design and module architecture has served as the source of inspiration for creating a variety of programming languages like Boo, Swift, CoffeeScript, Cobra, and OCaml. Each of these languages has many similarities with Python in syntax, object model, and indentation.

With its simpler syntax than C++ or Java, Python is the preferred choice for building machine learning programs. Its ability to handle large amounts of data is impressive. Furthermore, Scipy and Numpy are libraries for technical and scientific computing. Pandas is an instrument for manipulating data when utilized in conjunction with it, aids in the analysis of data. Pandas and Scikit that are used to assist in building and making use of machine learning applications are available for free and, as such, are extremely well-liked.

In addition to the applications mentioned in the previous paragraphs, Python also finds a particular application in graphic design software. It is a programming language used worldwide to create and design 2D imaging programs like Inkscape, GIMP, Paint Shop Pro, and Scribus. Additionally, Python is used in many 3D animations programs like Blender, Houdini, 3ds Max, Maya, Cinema 4D, and Lightwave.

Indeed, Python is the secret component of numerous operating systems and is the one that is most commonly used in Linux distributions. Ubuntu’s Linux-based Ubiquity Installer and Fedora and RedHat Enterprise’s Anaconda Installer are coded in Python. Even Gentoo Linux leverages Python Portage (package management system). Python is generally combined with the C programming language to create and create operating systems.

Python is a handy instrument for extracting a vast amount of information from web pages and websites. The data extracted is usually utilized in real-world processes like job listings, cost comparisons, R&D, etc. BeautifulSoup, MechanicalSoup, Scrapy, LXML, Python Requests, Selenium, and Urllib are among the top Python-based web scraping applications.

3 thoughts on “Top Applications Of Python In 2022”